Jodhapur history revolves around the Rathore Clan. Rao Jodha, the chief of the Rathore clan, is credited with the origin of Jodhpur in India. He founded Jodhapur in 1459. The city is named after him only. It was previously known as Marwar.

The Rathores were driven out of their original homeland, Kaunaj, by Afghans. They fled to Pali, near to the present day Jodhapur. Rathore Siahaji married the sister of a local prince. This helped the Rathores to establish and strengthen themselves in this region. In some time they ousted the Pratiharas of Mandore, just 9 km of Jodhpur. Initially, Mandore served as their capital, but, by 1459, Rathores felt a need for a secure capital.This lead to the formation of Jodhpur, the Sun City, by Rao Jodha.

The Rathores enjoyed good relations with all the Mughals, except Aurangzeb. Maharaja Jaswant Singh even supported Shahjahan in his struggle for succession. After Aurangzeb’s death, Maharaja Ajit Singh drove out Mughals from Ajmer and added it to Marwar (now Jodhpur). Under the reign of Maharaja Umed Singh, Jodhpur grew into a fine modern city.

During the British Raj, the state of Jodhapur was the largest in Rajputana, by land area. Jodhpur prospered under the British Raj. Its merchants, the Marwaris, flourished endlessly. They came to occupy a dominant position in trade throughout India. In 1947 India became independent and the state merged into the union of India. Jodhpur became the second city of Rajasthan.

Jodhapur’s early history is indelibly linked to the Rathore clan: the origins can be traced to the clan’s leader, Rao Jodha, who is credited with the founding of Jodhpur in 1459. Driven from their homeland by Afghans, the Rathores fled from Kaunaj to Pali, which is the site of present day Jodhpur. Rathore Siahaji’s marriage to the sister of a local prince helped establish the clan in the region. Eventually, the clan ousted the Pratiharas, who were the rulers of Mandore, an important settlement just a short distance away. They established their capital at Mandore for a time, but as needs for a more secure location arose, the site of Jodhpur – or the ‘Sun City’ – was chosen by Rao Jodha.

With the exception of Aurangzeb, the Rathores maintained good relations with the Mughals: in fact, Maharaja Jaswant Singh supported Shahjahan when he struggled for succession to the throne. After the death of Aurangzeb, Maharaja Ajit Singh forced the Mughals from Ajmer, and annexed the land to Marwar (as Jodhpur was known at that time). During the reign of Maharaja Umed Singh, Jodhpur prospered, developing into a modern city.

Jodhpur was the largest state in Rajputana in terms of land area by the time of the British Raj, and it continued to prosper, as did the Marwaris, who were the merchants of that time.When India achieved independence in 1947, the state joined the union of India, and became part of the larger state of Rajasthan, with Jodhpur being its second-largest city 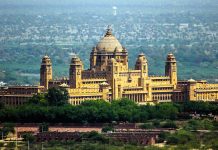