Amidst the celebrations for the Olympic Medals won by Malik and Sindhu, People barely noticed the hopes left for India in Olympics. No this post isn’t about Yogeshwar Dutt. Some Heroes who choose to stay away from the limelight, But their story is something inspiration for everyone out there. The way they came up surviving from the toughest battles of life.

Born in Khoksar in the Barmer district of Rajasthan, Kheta Ram’s humble origin is as a Naik Subedar of the Jat Regiment. He has one sister and four brothers. He used to run 4 km every day through the desert to a school that only had classes up to 8th grade. Many fast runners are from hilly areas which is thought to give them a red blood cell, lung efficiency and endurance advantage. In contrast, Kheta Ram’s abilities are thought to come from the strengthening his calves and hamstrings may have received from running in the Thar Desert.

He joined the Army at Age 18 as a means of earning a steady income, and got recognized for his athletic abilities. The Indian Army excuses world class sports persons from active duty, allowing them to train as an athlete full-time. He would like to use his privileges as an athlete to solve the acute water issues of his village. His parents and wife are not educated and don’t comprehend that he will represent the country in the Olympics. At the Mumbai Marathon in January this year, Kheta Ram clocked 2:17:23, well ahead of the 2:19 qualification mark.

Kheta Ram is the only earning member of his family and sends his savings home to his parents, wife and two children. His biggest expense is his monthly purchase of shoes (priced at roughly Rs 10,000 per pair) to accommodate the number of miles that the athlete runs each month. As of mid-2016, he does not have any corporate sponsorship and has to purchase his own shoes.

Stick to your TV to support the pride of Rajasthan, 6 PM @ Star Sports….

Do Express Your Love in Comments Section…………… 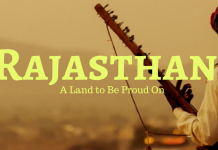 Reason Behind The Rising Of Indian Rupee Against The Dollar

Offerbaba.in – How this Startup is making waves in the Desserts of Rajasthan!