Salasar Balaji Dham Temple is a religious place for the devotees of Lord Hanuman. It is situated in Churu district of Rajasthan. Salasar Dham attracts innumerable Indian worshipers throughout the year. On Chaitra Purnima and Ashvin Purnima large fairs are organized every year where more than 6 to 7 lakhs of people assemble here to pay their homage to the deity. Hanuman Sewa Samiti looks after the management of the Temple and the fairs. There are many Dharamshalas to stay and restaurants to eat. 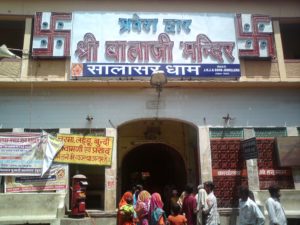 Salasar Balaji, famously known as Salasar Dham is a ‘Shakti Sthal’, the Place of Power. Salasar Dham is dedicated to Lord Hanuman and it is located in the Salasar town of Churu district in the Jaipur-Bikaner highway.

There was a story about the Lord Hanuman idol that it was found when a farmer had been ploughing his field. Wife of the farmer cleaned the idol with her sari and worshipped Lord Hanuman as Balaji. In the nearby village Asota, Balaji came into dream of Thakur of Asota and ordered to send idol to Salasar. Also a devotee of Lord Balaji Mohandas, also saw Lord Balaji idol and report it to the Thakur of Asota. After then idol brought to the Salasar.

Salasar  Balaji Dham  Temple was constructed in 1754 AD by Mohandas with mud stone only with the help of Muslim craftsmen Noora and Dau. Later on Rao Devi Singh, Jagirdar of Sikar made it with concrete and his descendants Kaniram and Ishwardas gave it a present look. While mostly white marble is used for the construction, its prayer hall and the Sanctu Sanctorum has a marvelous work of Silver and Gold. White marble carving work in the main entry gates of the temple is attractive and shrine is decorated with floral patterns work. Salasar Dham is famous for its miracles and wishes fulfillments of the devotees. Lacs of devotees often visit this temple and coconut tying, savamani are the traditions to practice in order to a fulfillment of their wishes. Managed and maintained by Hanuman Sewa Samiti, a large fair is organized on Hanuman Jayanti, Chaitra Poornima and Ashwin Poornima.

It is located in the town of Salasar, on National Highway 65 near Sujangarh in Churu district, Rajasthan. The temple of Balaji, another name of Hanuman, is situated in the middle of Salasar and attracts innumerable worshippers throughout the year. On Chaitra Purnima and Ashvin Purnima large fairs are organized which millions of devotees visit as they pay homage to the deity. 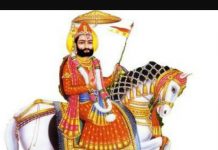