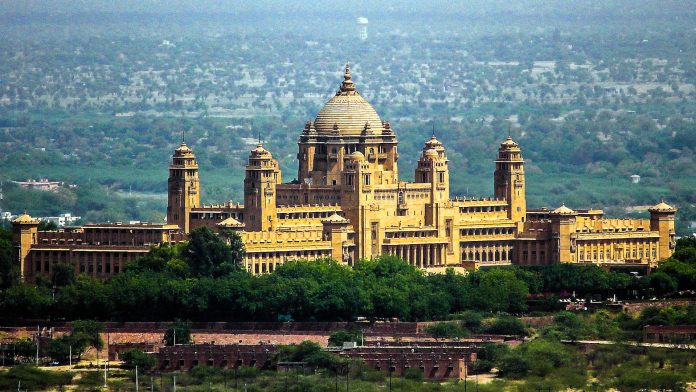 Indulged in the fascinating past and present with the immense glory of luxury, Taj Umaid Bhawan is on the count of grand palaces in India and commendable as world’s sixth-largest private residences.

Named after Maharaja Umaid Singh, this restored luxury heritage is perched atop Chittar hills, the highest point in Jodhpur. The golden-yellow sandstone retreat of Umaid Bhawan set amidst 26 acres of verdant gardens, is conceived on the grandest possible scale and placed in a fashionable deco style of that reign.

Looking into the verge of its blend of eastern and western architectural influence, it was designed and completed by a renowned British architect, Henry Vaughan Lanchester in 1943.

Not only this, it has more to go with its influential history, features, current scenario of rooms, hotel, and much more, which makes it even sustainable property till date.

Back up of History

Residing on the highest point of Jodhpur, Umaid Bhawan Palace is a signature of a fascinating bygone era. This epitome of new Jodhpur was home to the erstwhile royal family of Jodhpur and has one thing iconic in its construction, which is the palm court marble.

The saint, who declared a period of drought, would follow the golden rule of Rathore Dynasty, links origination of this heritage to a curse. And, indeed, this happened as well when in the 1920s, Jodhpur faced severe famine conditions. That’s the reason to help farmers; king Umaid Singh decided to build a lavish palace with an initial objective to employ famine-stricken farmers.

For many years, Umaid Bhawan Palace was not entirely in function because of tragic events in Royal Family. Then, in 1971, Gaj Singh II who succeeded his father decided to convert a part of the palace into a hotel.

With the lavish interiors, gilt furniture, elegant artwork, complemented by the exotic murals, the property has a tremendous attraction of art-deco style. The palace is segmented into proportions including a throne chamber, an exclusive private meeting hall, a durbar hall for public visibility, private dining zone to enjoy authentic Rajasthani and Indian cuisine. Then, there is an opulent banquet hall, a library, a billiards room, four tennis courts, two different marble squash courts, and long passages.

Apart from amenities and state-of-the-art, one can have regal experience in a true sense. As you can imagine yourself by waking up to peacocks dancing in the nearby lawns, a midnight dip in the subterranean zodiac pool, a healing wisdom in the romantic setting of the Taj Spa, and enjoying a game of billiards in the paneled recreation room.

Enclosed with excellent restaurants, charming lounge, and fairytale dining to satiate the taste buds and soul, Umaid Bhawan Palace has a unique traditional welcome to offer the guests.

The overall edifice has 347 rooms within it that throw up a glance of majestic living of Royal family. And, the hotel area of the palace is managed under the courtesy of Taj Group of Hotels with 64 guest rooms including Regal and Vice Regal Suites along with fabulous “Maharaja” and “Maharani suites.”

The property also houses a family museum as well as the resplendent of Umaid Bhawan Palace focusing on the 20th-century history of the Jodhpur Royal Family. With a quirky collection of clocks, photographs of the elegant art-deco interior, classic cars of the Maharajas, miniature paintings, armor, and amazing household paraphernalia, Museum has a lot of things to offer the sight of the visitors.

If you also want to revive princely comfort and soak into the rich history of imitable tribute.