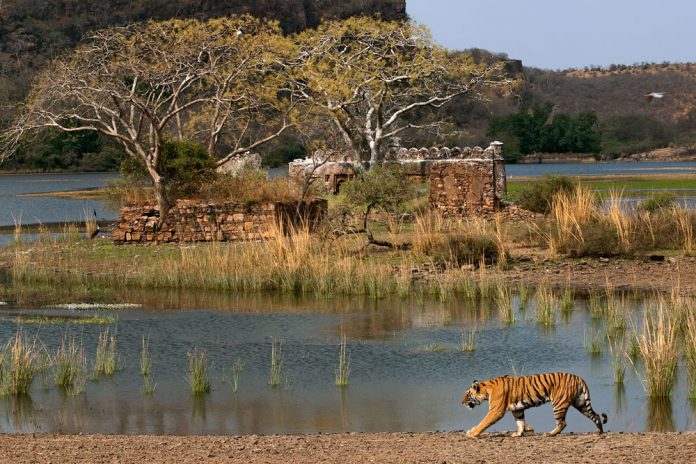 The beautiful state of Rajasthan is known for its sand dunes, fair and festivals, forts and tradition. Besides this National Park and Wildlife Sanctuaries in Rajasthan also adds major attractions of the Rajasthan state. The sanctuary offers a wonderful opportunity to explore nature in some different and unique way.

Following are the Famous National Park and Wildlife Sanctuaries in Rajasthan

It is one of the largest and most important National Park and Wildlife Sanctuaries in Rajasthan, which is situated in Sawai Madhopur. Originally, it was known as Sawai Madhopur Game Sanctuary in 1955 by the Indian government, but later it was brought under Project Tiger in 1973 and in 1980, it was declared as a National Park. Ranthambore National Park is mainly known for its tiger reserve.

It is situated in the Alwar district of the Rajasthan state and is one of the important National parks in Rajasthan. It used to be a hunting ground of Alwar in ancient times. It was brought under tiger scheme in the year 1978. This Park is situated at a distance of 107 km from Jaipur city and covers an area of around 866 sq. Km in the Aravalli range.

It is also known as Bharatpur Bird Sanctuary. This sanctuary is a habitat to a large number of migratory birds in the winter season and a very popular tourist point in Rajasthan. It is a man-made wet land, which also protects the town of Bharatpur from flooding during the floods. It is a home for 379 floral species, 366 birds’ species, and several animals also.

This sanctuary is situated near the town of Jaisalmer, covering an area of 3162 sq km. The unique landscape of the park is the greatest attraction point for tourists from all over the world. Almost 20% of the park is constituted of sand dunes and rest of the landmark comprises of fixed dunes, salt Lake Bottoms, and craggy rocks. The most commonly sighted birds here include the endangered Great Indian Bustard, Sand grouse, Tawny eagles, kestrels etc.

It is situated in the Rajsamand district of Rajasthan. It covers an area of around 578 sq. km and surrounds the Kumbhalgarh Fort from all sides. It is habitat for a large variety of wildlife some of them are highly endangered.  Its scenic beauty attracts tourists from every part of the world. It is situated at a distance of only 100 km from Udaipur city. Visitors can enjoy foot tracking, horse safari and jeep safari in the sanctuary.

It is situated along the southeastern border of Kota. It was established in 2004 and comprises of 3 wildlife sanctuaries namely The Darrah Wildlife Sanctuary, The Chambal Wildlife Sanctuary and the Jaswant Sagar Wildlife Sanctuary. It covers an area of around 250 sq km and is at a distance of 50 km from Kota city.

It is a habitat for a number of species, which includes Wild Boars, deer, nilgai, cheetah, and wolves. There is also a beautiful Fort in its premises. The river Chandrabhaga flows very close to the park and at its bank, there are temples of 7th and 8th This Park is closed from July to September for the visitors.

It is situated at the oldest mountain ranges of India i.e. The Aravalli Hills. It is one of the most visited wildlife sanctuaries in Rajasthan. It is 114 Sq km and the altitude ranges from 300m to 1722m at the Guru Shikhar peak (highest peak in Rajasthan). It has a variety of flora and fauna. It is the habitat of the number of animals like lions, tigers, bears, Wild Boars, hyenas etc. The Grey Jungle Fowl is the specialty of this sanctuary.

It belongs to Pratapgarh and covers an area of 423 Sq. km. It is the chief attraction of Pratapgarh as it is covered with dense and evergreen forest. The river Tankiya, Budho, Sita Mata, Karmoi, and Jakhen flows through this sanctuary. The most striking attraction of this sanctuary is the Vegetarian Mammal Flying Squirrel along with the leopard, pangolin, Wild Boars, caracal etc.

It is part of Ranthambore National Park & It plays great role in the National Park and Wildlife Sanctuaries in Rajasthan. It covers an area of around 676 sq km. It is situated at a distance of 25 km from Karauli. It is named after Kela Devi temple, which is situated in the sanctuary. Visitors can get a splendid view of both the rivers (Banas and Chambal) from the sanctuary. Commonly sighted animals are Sambhars, tigers, jackles, chinkara etc. Visitors can enjoy jeep safari and bird watching trips in the sanctuary.

This sanctuary is situated on the river Chambal, at the point where borders of Rajasthan, Madhya Pradesh, and Uttar Pradesh meets. It is also known as National Chambal Gharial Wildlife Sanctuary as it is dedicated mainly to conserve critically endangered Gharials, the red crowned turtle and the threatened Ganges river dolphin. It is habitat for several species of the Indian wolf, striped hyenas, mugger crocodile etc.

We have shared this above list of National Park and Wildlife Sanctuaries in Rajasthan according to our visiting experience and knowledge.

Please your National Park and Wildlife Sanctuaries in Rajasthan visiting experience in the comment section…….

An Overview of Kota the Education City of Rajasthan