Kota is one of the major cities in the state of Rajasthan, which is situated on the banks of the Chambal River. It is also known as the industrial capital of the state because many power plants and industries are set up in this city. Asia’s largest fertiliser plant is located in Kota. For trade between Gujarat and Delhi serves as a hub of Kota. Also known as an education hub kota because of the country at the top – which is at the prestigious engineering colleges and institutes in education come in number one.

Kota Popularly referred to as the “Education Hub” of Rajasthan, education forms an integral part of Kota’s economy. It has turned out to be a prominent hub for medical and engineering entrance examinations and lures thousand of students each year. Students across the country come here to specifically prepare for AIPMT and IIT-JEE.

Being a part of Rajasthan several mansion, castles, forts and other places that tourists are bound to come kota. In addition, there are various religious centers are quite famous. Gurudwara Azamgarh Sahib, the Godavari Dham Temple, Garadia Mahadev Temple, and Temple Mthuradish, Kota’s are one of the famous shrines. Kota is one of the most important shrines in Azamgarh Sahib. It is believed that keeping the dagger and the pair of wooden slippers, the tenth Guru of the Sikhs, Guru Nanak’s. This venue also a noted poet Ayodhya Singh “Hriuddh” is famous as the birthplace. Of all the famous monuments of Kota Jag Mandir Palace is immense historical significance. The monument, which is made up of brilliant red stone in the middle of the beautiful artificial Kishore Sagar Lake is located. The castle is accessible by tourist boats. Namely two famous museum in the Palace Government Museum and Maharaja Madho Singh Museum.

The Kota in the field of weaving saris widely acclaimed not only internationally but also in many parts of India is quite famous among women. These sarees called Kota Doria Doria which means thread. Is an interesting story behind the formation of these saris, but the fact these sarees was woven in Mysore Kota weavers were brought from the Mughal Army General Rao Kishore Singh, who had brought with him.

Therefore, it is known by the name Masuria Kota sari saris became known as the kota that was much in vogue. In many parts of the country is known as Kota Doria them. Cotton and silk them in short six yard is called magic.

How to Reach Kota

Passenger, until the kota air, rail and road are easily accessible. The nearest airport is Jaipur and Kota Airport Kota railway station is the nearest rail head for rail passengers. Like many cities in the state to come to Kota, Chittorgarh, Jaipur, Ajmer, Jodhpur, Bikaner and Udaipur etc. here easy to get buses.

The climate of Kota City

In kota summer and winter, both types can be picked up wandering Mums. The best time to visit is between October and March during the winter breaks.

Top 5 Most Popular Cities of Rajasthan 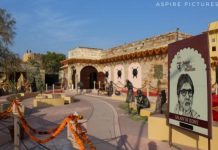