is Best Tourist Point of Rajasthan Is situated in Udaipur District Near Hawala’s Village Distance from  Udaipur City 3 Km.

Shilpgram Festival Held Every Year between 21 December To 31 December. It is 12 Days Function

Shilpgram Festival is held annually in the west of the city of Udaipur. Shilpgram Crafts Fair is organized to promote art and craft of Rajasthan. Since, Rajasthan has always been famous for its handicrafts and artwork; this fair is a perfect destination to try out the hand woven clothes, embroideries, mirror works and handicrafts.

Situated 3 kms west of Udaipur city near the Havala village is the Centre’s Shilpgram – the Rural Arts and Crafts Complex. Spread over an undulating terrain of 130 bighas (70 Acres) of land and surrounded by the Aravallies, the Rural Arts and Crafts Complex is conceived as a living enthnographic museum to depict the lifestyles of the folk and tribal people of the West Zone. Within this complex, huts of the member states are constructed incorporating traditional architectural features of different geographical and ethnic groups residing within the West Zone of India comprising of five Federal States.

One of the important objectives of Shilpgram is in the sphere of increasing awareness and knowledge of rural life and crafts, specifically, for the younger generation. Special emphasis is laid on workshops for children on arts, crafts, theatre and music.

The Rural Arts and Crafts Complex – Shilpgram – would also provide an opportunity to rural and urban artists to come together and interact through the process of camps and workshops. It is hoped that through intimate observation of different styles and experiences, urban and rural artists would learn from one another and enrich their skills and art forms. The Centre promotes contemporary urban ceramists, potters, designers, visual artists etc. to work with their traditional counterparts in creating works of everyday art which would then be put up for exhibition and sale for visitors.

The Center developed two Museums in the Shilpgram where simple objects of day-to-day use, that represent the sense of wonder and aesthetics in rural and tribal life are put on display. In addition, a Crafts Bazar in the fashion of a traditional ‘haat’ was made where visitors could buy traditional crafts from the Zone. Craftsman were invited periodically to demonstrate their skills and sell the crafts to the visitors at the Shilpgram.

An attraction no less of the Rural Arts and Crafts Complex is the open air Amphitheatre with a seating capacity of approximately 8000. Besides the major theatre festivals which the Centre hold here, it is hoped that this facility would motivate the local community as well as outside visitors to take a keener interest in theatre and the traditional folk performing arts.

Shilpgram Festival is a continuing activity at Shilpgram in which traditional performing artists and craftsmen are used to draw from the interior villages of the member states. They are regularly invited to exhibit their skill and to demonstrate their crafts, and sell their masterpieces in order to have direct access to the buyers. This programme has encouraged the rural craftsmen and performers in a big way. The Shilpgram Festival has become an important landmark in India and Government of India has decided to replicate them in all the Federal States of India.

In these traditional huts, household articles of everyday use – whether terracotta or textile, wooden or metal, along with decorative objects and implements – agricultural or craftsmen’s tools, etc. are featured with appropriate signages and explanatory details. The objective is to give a realistic glimpse of the people and their belongings representing Unity in Diversity and National Integration.

In order that the above is vested with its own internal dynamism, the huts are constructed around an interlocking occupational theme. Traditional village life was said to have been, to a considerable extent, self-contained and self-sufficient with a potter, a carpenter, a blacksmith, often a weaver, living alongside one another. The Centre’s Rural Arts and Crafts Complex adopts this cellular approach such that each individual hut is at once an organic entity and at the same time nourishing and husbanding a series of such transactions.

In this integrated pattern are 5 huts from Rajasthan, representing weaver’s community from Marwar. There are 2 huts named after the two sand bound villages of Rama and Sam from the desert region of western Rajasthan. From the hilly region of Mewar, is a potter’s hut from the village Dhol, 70 kms west of Udaipur. Two huts represent the tribal farmer communities of the Bhil and the Sehariyas of the Southern regions of Rajasthan.

There are 7 representative huts from the state of Gujarat. A cluster of six huts from Banni area and one from Bhujodi have been selected from the arid wastelands of Kutch. the Banni cluster consists of two huts each of the Rebari, Harijan and Muslim communities famous for their weaving, embroidery, bead & mirrorwork, wood work and rogar work. Equally well known for its valiant horses, Lambdia village near Poshina in North Gujarat is represented with a potter’s hut. Adjoining to the Lambdia potter’s workshop at the Shilpgram is the weaver’s hut from Vasedi village in Chota Udaipur area in western Gujarat. Two huts represent the Dang and Rathwa tribal farmer communities of southern Gujarat. In addition to these, there is an ornately carved wooden house from Pethapur near Gandhinagar.

Selected after an exhaustive survey of the Konkan coast of Maharashtra, the Koli hut is from a seashore hamlet in Raigarh district. Close to the Koli hut stands one from Kolhapur – representing leather chappal craftsmen from southern Maharashtra. From Thane district in north Maharashtra is aWarli hut replete with its wall paintings. The tribal farmer community of the Kunbis is also represented along with two huts of the Gond and Maria tribal communities from eastern Maharashtra famous for their ‘dokra’ work.

From the member state of Goa, there are 5 representative huts. A potter’s hut from Bicholim stands in close proximity to a Hindu hut and Christian hut made of local laterite stone. From the lush green taluka of Canacona is a typical hut of the Kulumbi tribal agriculturalists renowned for their grass and cane weaving work. A hut chosen from the Mandovi riverside represent the traditional fisherman’s way of life.

Thus each member state of the West Zone has huts derivative of certain basic occupations fundamental to the way of life of the people of the area. In addition, certain occupations feature a commonality so as to offer a basis for comparison. For example, three member states have a potter’s hut since working with the earth is fundamental to all our cultures. What is interesting to highlight is how Indian people have fashioned and reshaped this basic element to suit their environment, needs and aesthetics. Similarly, two member states of the West Zone feature weaving, again as an affirmation of how geography and needs have given rise to such a variety in this most basic of occupations. Also while the above are illustrative and not exhaustive, the occupations and crafts to be shown will differ so as to cover a wider variety of our crafts heritage.

In order to ensure that a visit to Rural Arts and Crafts Complex – Shilpgram Festival Udaipur – becomes an educative and enriching experience, the hut from Sam (Marwar) is planned as the Activity and Documentation Section where workshops, seminars etc.can be organised. Similarly the cluster of Banni and Bhujodi huts from Gujarat would comprise of Guest Room facilities for the visiting master craftsmen, researchers and scholars. A Goan mainstream hut and Mewar potters hut can accommodate children and students.

Source Of Text  By  : Shilpgram.in

Some Photos of Shilpgram Fesival Udaipur 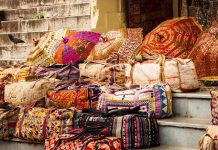 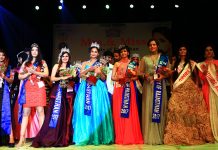